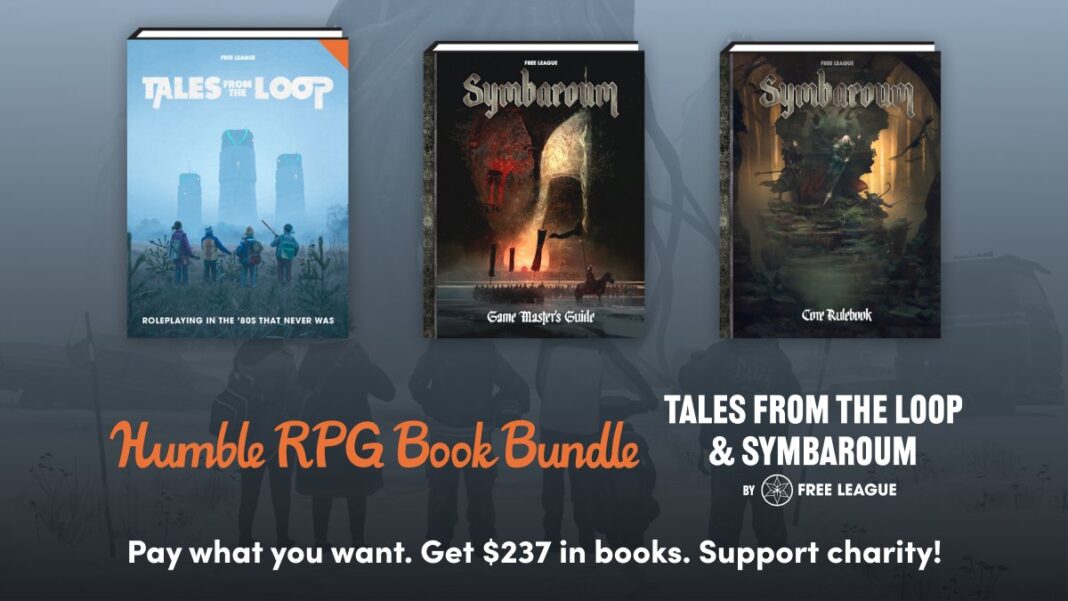 Humble’s latest charitable bundle launched today and includes the award-winning tabletop roleplaying games Tales From the Loop, Things From the Flood and Symbaroum from game developer and publisher Free League.

The massive TTRPG bundle is up for grabs now up until June 14 at 11 am PT and includes:
TALES FROM THE LOOP & THINGS FROM THE FLOOD

FIND OUT MORE AT HUMBLE BUNDLE

TALES FROM THE LOOP RPG

“RPG Tales From the Loop lets you channel Stranger Things and ET.” – The Verge

Step into the amazing world of the Loop and encounter the fantastic machines and strange beasts that have come to haunt the countryside. Escape your everyday problems and solve mysteries, you will become a part of something meaningful and magical – but also dangerous.

The award-winning Tales From the Loop roleplaying game is based on the work by acclaimed artist Simon Stålenhag. The retro futuristic art captures the spirit of Swedish 1980s suburbia and have spread like wildfire worldwide with a unique atmosphere that is both instantly recognizable and utterly alien. The art book Tales From the Loop has also been released as a TV series on Amazon Prime Video.

THINGS FROM THE FLOOD RPG
ROLEPLAYING IN THE ’90s THAT NEVER WAS
“It’s darker, deadlier and a little depressing in places, but this follow-up takes everything that made Tales from the Loop great and adds a new twist.” ~Tabletop Gaming

Somewhere out there beyond the fields and marshes, abandoned machines wandered impatiently. Perhaps, if we had listened closely, we would also have heard it. The sound rising from the sealed caverns in the depths: the  pounding from something trying to get out.

Welcome back to the world of the Loop – things are different now.
This time you can die.

Based on the retro futuristic works of internationally acclaimed visual storyteller Simon Stålenhag, the multiple award-winning Tales From the Loop roleplaying game was released in 2017 and let you experience this amazing world of the Loop firsthand.  In the standalone sequel roleplaying game Things From the Flood, based on the art book by Simon Stålenhag, the story continues into the 1990s.

SYMBAROUM RPG
ROLEPLAYING IN A DARK AND WONDROUS WORLD
[Best Game nomination at the Origins Awards]“Symbaroum excels in every single aspect of game design: the setting, the rules, the layout, the art.” –RPGnet Review
Explore vast forests in the hunt for treasures, lost wisdoms and fame. Visit the barbarian clans to trade or to plunder their treasuries. Establish a base of power among princes, guilds or rebellious refugees or survive encounters with trolls, dark-minded Blight Beasts and undead warlords.

But whatever you do, never ignore the warnings spoken by the wardens of the forest: tread carefully and do not disturb the ruins of old, for the dark deep of Davokar is about to awaken.

Scoreboards are coming to Battlefield 2042 next month